Brexit- How will it affect small businesses?

Although it is currently hard to say how Brexit will affect small businesses in Ireland, or whether it will be a ‘hard’ or ‘soft’ exit, it is imperative that we are prepared for it.do 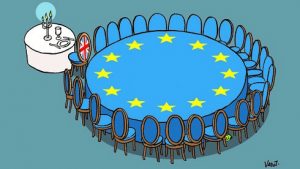 How Challenging will Brexit be?

Brexit will be challenging for us, however it happens. In general terms though, the harder the Brexit, the worse it may be for us, as the greater the break between the UK and Europe, the bigger the threat to our trade between the UK and Ireland.

The volume of trade between Ireland and the UK, estimated at over €1 billion in goods and services being exchanged between our countries on a weekly basis, means that Ireland will want to keep trade with our neighbours as open as is possible. But at the same time there are rumours about businesses and State Bodies wanting to capitalise on the move of multinationals out of the UK, should this arise. It has been reported that the IDA have approached over 1000 multinationals to assure them that Ireland’s future remains aligned with the EU. Government sources have also, once again, reiterated Ireland’s commitment to the 12.5% rate of corporation tax.

So at one end of the extreme, “hard” Brexit could involve the UK refusing to compromise on issues like the free movement of people even if meant leaving the single market. At the other end of the scale, a “soft” Brexit might follow a similar path to Norway, which is a member of the single market and has to accept the free movement of people as a result of that.

A little background to Brexit:

The European Union is a group of 28 European countries that are tied by an economic and political alliance. This political understanding led the way for the use of the euro (the currency used in 19 EU countries) and permits citizens in the EU to travel between countries easier. The EU even employs its own parliament and makes decisions regarding things like trade, transportation, and environmental policy.

The EU allows the countries within it to function largely as a single entity. It was initially put in place to allow for the free movement of people, goods, and money under what it termed a “single market.”

The European Union single market, which was completed in 1992, allows the free movement of goods, services, money and people within the European Union, as if it was a single country. It is possible to set up a business or take a job anywhere within it. The idea was to boost trade, create jobs and lower prices. But it requires common law-making to ensure products are made to the same technical standards and imposes other rules to ensure a “level playing field”.

What can we do as businesses to protect ourselves as Brexit progresses?

And don’;t leave it too late….