The payroll operator will usually first notice this as flagged in the Validate Payroll routine: It shows the issue and the recommended resolution as follows:

The suggested resolution is for the payroll operator to edit the figures as required and save the record. This is in fact all that can be done to make this scenario right. We can argue that modernisation was supposed to take all of such edits out of the hands of the payroll operator, and we would be right. And we could worry that the operator does not have easy access to the required information, since they are no longer issued with P45 information and we would also be right. But neither of those are for us to consider. This software is at the mercy of what is delivered by the RPN and we have no control over that. The software works fine when the RPN delivers non negative values, and so we can deduct that the software is working correctly.

Advice To Customers:
If the issue is in the Prev Eer Tax Paid or Prev Eer USC Paid fields, then ask the customer – are they sure that the figure is not supposed to be negative? See note below regarding ‘Scenario when Prev Eer Tax/USC paid can be negative’.

If they are sure that the value is not supposed to be negative, then explain to them that the issue lies within the delivered RPN from ROS. Advise them to edit the Prev Earning fields in question (as suggested by Sage) and change them to the correct figures. Sympathise that we cannot help them to find the correct values to be entered – they will have to press Revenue or the Employee for this information. [We should avoid suggesting what figures should be entered. They will need confirmation from another source to find out what to enter].

Explain (with regard to Prev Earnings) how the Pay/YTD screen works: 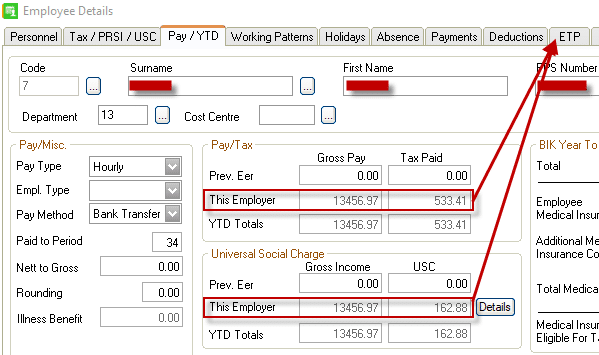 Encourage them to run the ‘Validate Payroll’ option during every payroll, to bring to light any such issues. (They are supposed to be doing this anyway). All solutions to ‘Validate Payroll Data Errors’ are listed in Sage KB number 44659.

Suggest to them that Sage have been made aware of this issue and are in discussions with Revenue.

Knock On-Effects of this Issue: If this issue was with the Gross Pay field and had gone un-noticed by the payroll operator, it means the employee’s tax may have been calculated for a period of time on less Gross Pay than it should have been. This may have benefitted the employee tax wise. When the operator enters the correct (positive) Prev Er figure the employee may pay a higher amount of tax for a time until it resolves itself cumulatively. This can be different case by case.

A Reminder of How Re-Instating a Leaver used to work Pre – Payroll Modernisation:
Historically, when an operator needed to re-instate an employee the procedure was to take the ‘This Employment’ figure from the Total Pay on the P45 and enter the remainder in the ‘Prev P45’ line: 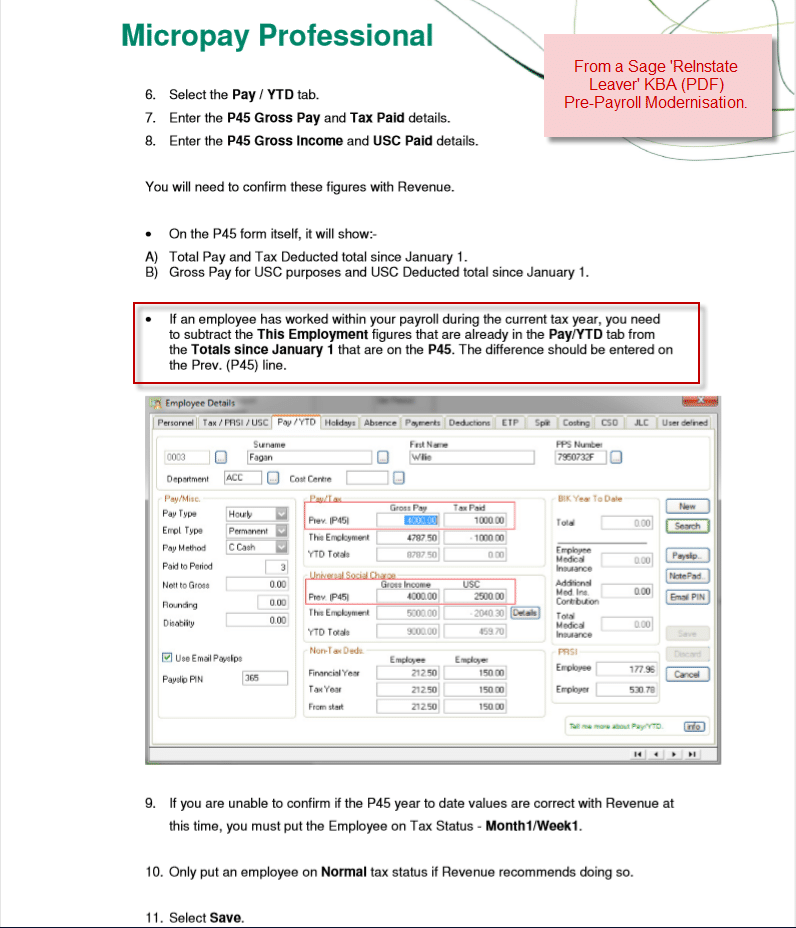